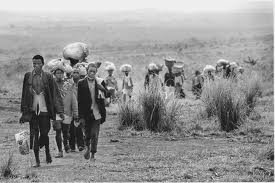 Everyday life and problems of refugees on one hand, and the exploitation of this situation on the other hand,   is a dramatic story shared by so many refugees.  A refugee, who is encountered with different threats in his/her country, has to leave there and seek refuge in other countries.

Yet, the whole asylum story is not limited to financial and mental problems.

Unfortunately, many of the refugees are unaware of being exploited at the beginning, and after a while, they find out about those abuses.

We intend to clarify and shed light on some of them to prevent these abuses as much as possible. Many different Organizations and groups that call themselves by different names, try to find refugees, sympathize with them at the beginning, and give them some promises from the financial pledges to helping them to proceed with their cases which mostly turn to be sheer lies.

For instance some of those groups introduce themselves as refugee rights activists and accept their advocacy free-of-charge so to deal with their case with a view to helping refugees.

At first, they talk to refugees and promise they will investigate their cases after sending attorney forms, officially making themselves refugee’s lawyer.

But it’s not the end of the story, after getting their advocacy they won’t respond them anymore or follow-up their case.  They accept their advocacy just because they want to get advantages of those cases in their own country such as the U.S. and get huge budget and because the case is free they won’t pay any tax.

They even behave in humiliation and impolitely with those refugees whose cases face with some problems or have been appealed. This is contrary to the basics of human rights and philanthropy and at this grave situation, all the claims of these organizations and groups which are based on human rights are suddenly disappeared.

All these attorney and unmet promises and hopes are because of not paying taxes; unfortunately this is one way for them to maintain a source of income for some organizations and groups.

Therefore, we need to consider being careful, scrutinizing those groups and making sure of their validity and reliability in order to avoid falling into their hands as their puppet and not allowing them to abuse us.

Staff Reporter Abul kalam of Camp 16 told to our correspondence that Rohingya Community Members actually want to go back to Myanmar, not to a island which is in the middle of bay of Bengal. It is really very dangerous during monsoon season. Recently, some leaders from different camps went to see the location whether […] END_OF_DOCUMENT_TOKEN_TO_BE_REPLACED