Tun Lon Sein, a newly arrived refugee from Myanmar who was headed for resettlement in New Bern, North Carolina, on a taxpayer-funded flight that began in Thailand, appeared in federal court on Friday.

Sein faced criminal charges stemming from an incident in which he allegedly jumped “out of an American Airlines plane Thursday onto the tarmac at Charlotte Douglas Airport” after he tried “to bite [a] flight attendant’s hand,” WSOC TV reported.

“The Episcopal Migration Ministry sponsored Sein’s immigration to the United States. The agency said it’s talking with the law enforcement and the State Department to see what they can do to help,” according to WSOC.

The Episcopal Migration Ministry [EMM] is one of the nine large voluntary agencies [VOLAGs] that are paid more than $1 billion per year by the federal government to resettle refugees in various locations around the United States.

“EMM collaborates with local partner agencies in 27 Episcopal dioceses and 22 states to welcome those fleeing persecution,” according to the IRM website.

IRM has resettled refugees in the New Bern area — many of them from Myanmar, also known as Burma — for more than a decade. “Nearly 2,000 Burmese refugees [live] in [New Bern], the picturesque coastal North Carolina town of 30,000, known as the birthplace of cola giant Pepsi,” 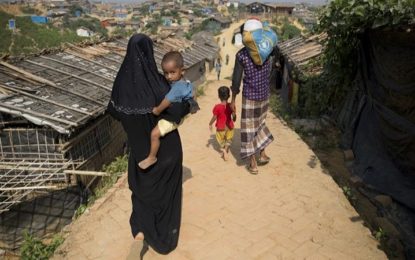