Germany's ruling party wants tougher immigration laws that give priority to Christian migrants instead of Muslims. The party also wants to ban full-face and partial-face veils, end dual citizenship, require that all immigrants learn German and cap the number of aslyum seekers at 200,000 a year. 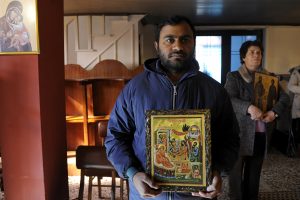 An Christian Orthodox Pakistani migrant living at a makeshift camp for refugees and migrants, holds an icon during a mass marking the Sunday of Orthodoxy at the church of the village of Idomeni, Greece, March 20, 2016. REUTERS/Alexandros Avramidis – RTSBCOT

"Germany must stay Germany," the paper states. "We are against our welcoming country being changed through migration and waves of refugees. We shouldn’t be the ones who adjust to migrants, the opposite should be true."

The executive committee, headed by the principal secretary to the prime minister, will oversee the overall process of the relocation The government has formed a high-powered executive committee with respect to the planned relocation of nearly 100,000 Rohingyas to Bhashan Char from the congested camps in Cox’s Bazar, multiple sources told Dhaka Tribune on Monday. […] END_OF_DOCUMENT_TOKEN_TO_BE_REPLACED