A Hungarian television camerawoman who was filmed tripping and kicking migrants fleeing police has been found guilty of breaching the peace.

A judge in Szeged, southern Hungary, said the actions of Petra László triggered “indignation and outrage”, and rejected her defence lawyer’s argument that she was trying to protect herself.

The judge found her guilty and sentenced her to three years’ probation. If she does not reoffend during that period the conviction will be dropped.

In television footage which sparked global outrage, László can be seen tripping up a man sprinting with a child in his arms, and kicking another running child near the town of Röszke, close to the border with Serbia. 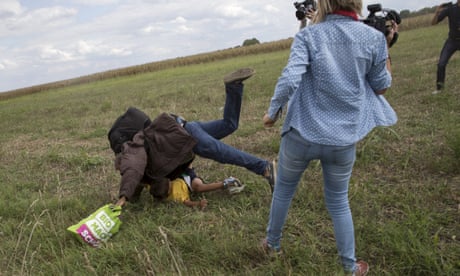 It later emerged that the camerawoman, who was fired over her actions, had been working for N1TV, an internet-based television station close to Hungary’s far-right Jobbik party.

The incident on 8 September 2015 occurred as hundreds of migrants broke through a police line at a collection point close to the Serbian border. “I turned and saw several hundred people charging toward me; it was quite incredibly frightening,” she said.

Bangladesh is hosting more than one million Rohingya, a mainly Muslim minority community who are stateless, most of whom fled following a wave of violence in Myanmar’s Rakhine state in 2017. “More than three years have elapsed. Regrettably, not a single Rohingya could be repatriated. The problem was created by Myanmar, and its solution must […] END_OF_DOCUMENT_TOKEN_TO_BE_REPLACED