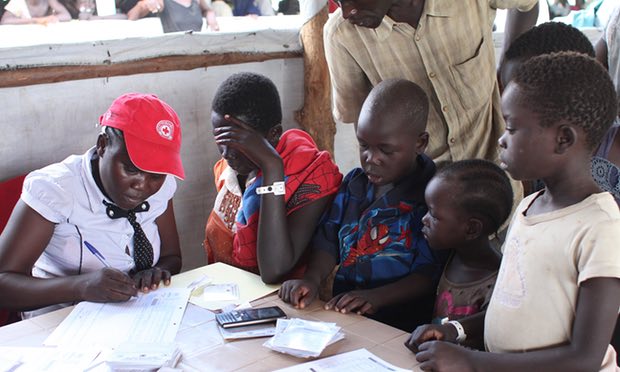 Dazed and exhausted, Joyce Mori sits on the floor cradling her sleeping daughter as they wait to have their fingerprints taken. One of 1,600 refugees who have arrived at the Imvepi reception centre in the West Nile region of northern Uganda, she has finally made it out of South Sudan’s war but, like many others, is thinking about loved ones left behind.

Leaving her village of Mukaya, she travelled to the town of Yei with her four children. From there it took eight days to walk to the border, pushing her three-year-old on a bicycle while the others followed on foot.

“My husband is a soldier and was forced to stay and fight. I have no hope he will find us here,” she said. “I came only with some cooking utensils. I don’t know what to expect and I have no money to do anything.”

The latest arrivals report snipers at the border are now targeting anyone trying to flee. Packed buses arrive every 15 minutes carrying those who have made the crossing safely. Most are women and children but there is a new wave of young men leaving to avoid conscription and considered traitors by those loyal to the regime.

Among them is 29-year-old Gideon, whose family was ambushed on their journey by armed men. His eyes brim with tears as he stares down at his red flip flops, dusty but intact after four days of walking. “We left everything to start a new life here. On the way men came and took all our cows. They were all we had.”

Weary families move in orderly lines from one tent to the next, the various stages of bureaucracy. Others stand patiently in queues waiting for a hot meal. Aid workers are diligently catering for the influx but the pressure is mounting. Imvepi opened in December but already 60,000 people have registered with a further 20,000 still to receive their identification cards.

Uganda is now home to 1.25 million refugees, including 898,000 South Sudanese who have fled civil war and famine. For years a progressive policy allowing refugees to obtain a plot of land, start businesses and access healthcare and education has proved a godsend for people from Uganda’s unstable neighbours.

The compassionate approach, dating back to the 2006 Refugee Act, is not purely altruistic. Entrepreneurial incomers helped the economy while new settlers provided larger markets for existing businesses. Those on both sides of the border tend to be from the same tribe and share a language and relations have been good, with the mutual benefits of improved infrastructure often funded by foreign donors.

But now the unprecedented influx from South Sudan, coupled with food shortages, drought and high unemployment, means that hospitality is waning, especially in some areas where refugees now outnumber the indigenous populations.

Isabelle D’Haudt, an adviser on humanitarian aid with the European commission, said while integration has proved successful in the past, the cracks are starting to show. “Host communities that have shared their land have benefited from new schools and health centres. But expectations are not always met and we are seeing increasing tensions as refugees and locals compete for services and natural resources.”

She added: “The crisis is a financial one – the framework is there but we need funding to provide better facilities – we can’t work miracles without money.”

And there are signs that the largely peaceful climate is coming under threat. In the border town of Lamwo, landowners are resisting the relocation of refugees. Politicians have been stoking tensions by inciting locals to demonstrate in the camps or hamper the delivery of aid. Last month armed youths ambushed a convoy in an attempt to stop supplies reaching the settlements.

D’Haut said: “It only happened once but it is a warning of what could come without more money to ease the pressures.”

he persecution, ethnic cleansing, and attempted genocide of Rohingya Muslims in Myanmar’s Rakhine state is an affront to the rule of law, a well-documented atrocity and, according to a top international lawyer, a moral stain on “our collective conscience and humanity”. So why are the killings and other horrors continuing while known perpetrators go unpunished? It’s a […] END_OF_DOCUMENT_TOKEN_TO_BE_REPLACED