Mytilene, Lesbos Island, Greece – When 17-year-old Karime Qias, an Afghan refugee, arrived in Greece‘s Moria refugee camp two months back, she felt as though she had arrived in prison.

Along with her mother and seven siblings, she shared a flimsy tent with strangers.

“The facilities were not hygienic, and the food was not edible,” she says, sitting in the kitchen of a Syriza party office in Mytilene.

Qias is one of 34 refugees and migrants who have occupied the local office of Syriza, Greece’s ruling left-wing party, to protest foul living conditions asylum seekers endure in Moria and other camps.

Local anti-fascist and solidarity activists helped the group in the planning and occupation of the building, and the demonstration has extended two weeks.

“Because the food in Moria was not edible, we continuously suffered from vomiting, diarrhoea and constant dehydration,” Qias says. “When we would go to the doctor, the doctor would say everything is fine.”

Built to house some 2,000 people, more than 6,000 refugees and migrants currently live in Moria, on the eastern part of Lesbos Island.

Rights groups and aid organizations have decried the camp’s decrepit living conditions, calling on the Greek government to move asylum seekers to the country’s mainland.

After a fortnight inside the overcrowded camp, violent clashes between Arab and Afghan refugees prompted Qias, her family and dozens of other refugees to leave.

“During the first fight we saw, 16 of us were in a tent made for eight people,” she says, explaining the clash was one of 10 fights during her time there. 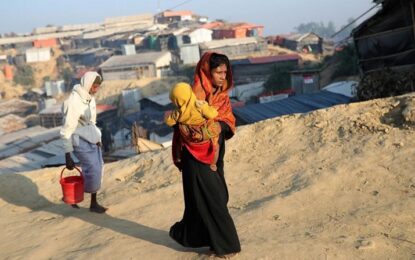 The UN Special Rapporteur on the situation of human rights in Myanmar, Thomas Andrews, has questioned Myanmar for not fulfilling its commitment over Rohingya repatriation. “Where is justice for those stranded in refugee camps in Bangladesh while facilities are constructed on their homeland for the same military that stands accused at the International Court of […] END_OF_DOCUMENT_TOKEN_TO_BE_REPLACED