Myanmar’s military junta has deployed a notorious infantry unit in Mandalay, where two people were shot dead on Saturday, in what campaigners described as a worrying escalation of the crackdown on peaceful protests against the coup.

Police and soldiers fired live rounds into a crowd of protesting dockyard workers in the country’s second city, killing two and injuring several others, according to local media.

Protesters were undeterred by the escalation of violence, with crowds gathering in Mandalay and Yangon, the commercial centre, on Sunday.The first known casualty of the coup, Mya Thwe Thwe Khine, died on Friday after being shot in Naypyidaw, the capital, earlier this month, according to local media.

Witnesses in Mandalay on Saturday reported seeing soldiers from the 33rd Light Infantry Division, which led the deadly campaign against Rohingya Muslims in western Rakhine state in 2017.

Human rights groups working to piece together witness reports and videos from Mandalay said that it was not yet clear whether police or soldiers had delivered the fatal shots. Rights watchdogs voiced alarm at the junta’s deployment of a unit blamed for atrocities against civilians, including a massacre of 10 Rohingya men. The US Treasury imposed sanctions against Aung Aung, the division’s commander, in 2019.

“It’s really worrying to see a military deployment, particularly of the 33rd Light Infantry Division, which previously committed crimes in Rakhine state and was involved in rounding up Rohingyas in 2017,” said Manny Maung, a Myanmar researcher for Human Rights Watch. “It’s really important that these incidents be investigated and that they face the full force of the law.” 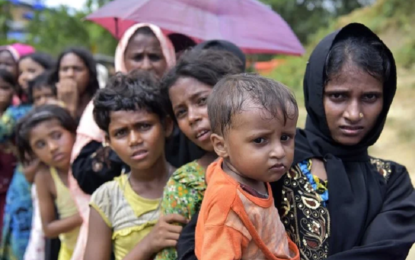 DHAKA: Rohingya refugees have welcomed the beginning of the month of Ramadan with a sense of solitude and isolation on Bhashan Char island, where thousands were been moved by Bangladeshi authorities from the overcrowded camps of Cox’s Bazar. Over 18,500 Rohingya Muslims have been relocated to the remote island in the Bay of Bengal since […] END_OF_DOCUMENT_TOKEN_TO_BE_REPLACED