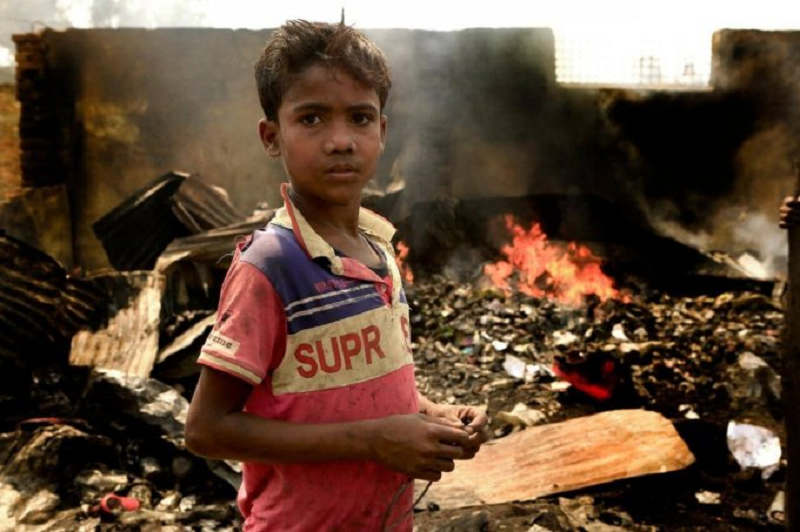 15 April 2021 – Rohingya refugees living in in the Cox’s Bazar camps in Bangladesh are fearing for their lives after seven more fires broke out since Sunday, taking the total number of fires to 84 in just four months, according to data from the Inter Sector Coordination Group (ISCG).

There have now been more fires in the world’s largest refugee settlement since the start of 2021 than in the whole of the previous year, when 82 fires were reported. Ten fires were reported in one single day this year, on 29th March.

A major fire broke out in the camps on Monday 12 April, destroying eight family shelters along with a mosque, a women’s centre and a children’s learning centre. The incident was the 45th fire since the deadly blaze that ripped through the camps on 22nd March, which killed 11 and left more than 45,000 refugees homeless.

Frightened Rohingya refugees have formed patrols to watch for fires at night in order to protect children and loved ones and fight the fires as they occur. They fear it is only a matter of time before another major blaze tears through their homes.

Abdullah, a Rohingya humanitarian volunteer living in one of the camps said: “We are exhausted by all of the fires happening here…** We can’t sleep at night because we are afraid of fires. It is making us sick. Some people were working but they have had to stop because of the number of fires — they are afraid to go out and leave their families at home.”

“We are even more afraid of what may happen during Ramadan. As per the government directives to prevent the transmission of COVID-19, we have had to close all the shops in the evening and all the adults will go to pray at night, leaving women and children alone at home. It isn’t safe.”

Despite the government’s decision not to allow Rohingya people to go outside their camps at Cox’s Bazar and Noakhali’s Bhashanchar, scores of refugees from Myanmar’s Rakhine have entered the port city in Ramadan and staying here for collecting Jakat. Around 1.1 million Rohingyas entered  Bangladesh in 2016 to escape Myanmar junta’s crackdown on the minority […] END_OF_DOCUMENT_TOKEN_TO_BE_REPLACED