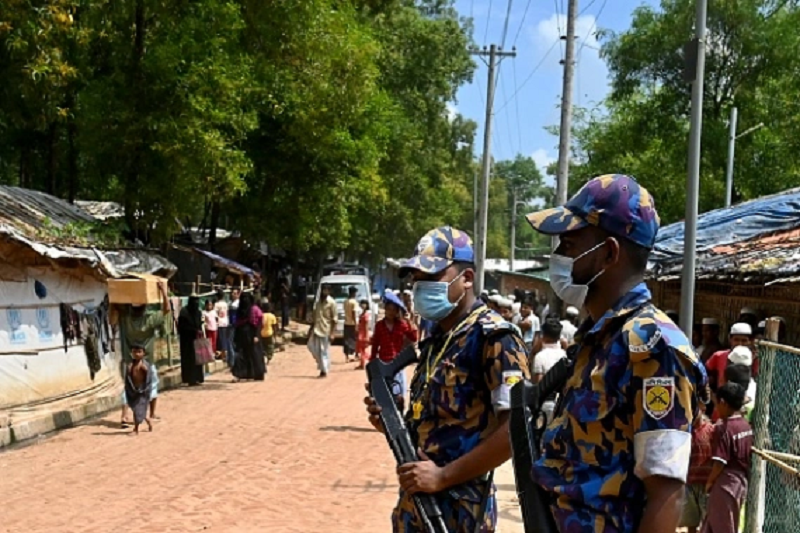 Bangladesh police have arrested the brother of a notorious rebel leader whose organisation has been blamed for murders and drug trafficking in Rohingya refugee camps.

Mohammad Shah Ali was arrested late on Saturday by the elite Armed Police Battalion. He is the half-brother of Ataullah Abu Ammar Jununi, the leader of the Arakan Rohingya Salvation Army (ARSA) armed group.

Commanding officer Naimul Haque told the AFP news agency that Ali had admitted his links with ARSA and that “Ataullah was in regular contact with him”. He also said police had rescued one person kidnapped by Ali, without giving further details.

The country is home to about 850,000 members of the stateless mostly-Muslim minority, who live in overcrowded settlements after fleeing systemic discrimination and violence in neighbouring Myanmar.

ALSO READ THIS: BANGLADESH POLICE USE DRONES IN COX’S BAZAR AFTER CRIME RISE AT ROHINGYA CAMPS

Rohingya refugees are caught in the middle of violence by armed groups within the community and a police crackdown.

ARSA, formerly known as Harakatul Yakeen, says it is fighting on behalf of the dispossessed Rohingya community, which has been denied the most basic rights, including citizenship. Myanmar authorities have accused its group members of being Muslim “terrorists”.

ARSA first emerged in October 2016 when it attacked three police outposts in the Maungdaw and Rathedaung townships in Myanmar, killing nine police officers.

Arakan is another term for Rakhine, the western state of Myanmar where most of the country’s 800,000 Rohingya live.

Mohammad Salim, a Rohingya refugee living in Nouakar Mat camp, welcomed Ali’s arrest. “Everyone here is terrified by him,” Salim told AFP. “[He] used to oppress us.”

Facebook owner Meta’s dangerous algorithms and reckless pursuit of profit substantially contributed to the atrocities perpetrated by the Myanmar military against the Rohingya people in 2017, Amnesty International said in a new report published today. The Social Atrocity: Meta and the right to remedy for the Rohingya,details how Meta knew or should have known that Facebook’s […] END_OF_DOCUMENT_TOKEN_TO_BE_REPLACED