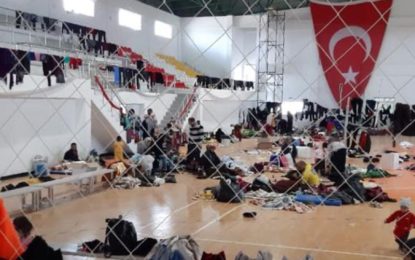 On 15 May 2020, the administration of the self-declared Turkish Republic of Northern Cyprus (TRNC) forcibly sent 100 Syrian refugees, including unaccompanied children, to Mersin, Turkey. They have been transferred to Kilis, near the Syrian border, where they are now. Most of the 100 Syrian refugees – 56 – are children and women and girls […] END_OF_DOCUMENT_TOKEN_TO_BE_REPLACED

Survivor recounts how, with 58 already dead, they overpowered the traffickers and took control of the boat and their destiny The boat carrying more than 400 Rohingyas, which landed in Bangladesh in the early hours of April 16, had experienced a dramatic mutiny 30 hours earlier. In that mutiny, four of the 11 Rakhine traffickers […] END_OF_DOCUMENT_TOKEN_TO_BE_REPLACED

Find out how the aftermath of the refugee crisis is still upending politics across Europe—when you subscribe to World Politics Review (WPR). As the nationalist, anti-immigrant Sweden Democrats claimed their best result yet in Sweden’s parliamentary elections in September, the nation’s newspapers went bold with their headlines. “Chaos,” read the front pages, in all caps, […] END_OF_DOCUMENT_TOKEN_TO_BE_REPLACED

The Trump administration is preparing to withhold tens of millions of dollars from the United Nations agency for Palestinian refugees, cutting the year’s first contribution by more than half or perhaps entirely and making additional donations contingent on major changes to the organization, US officials said. Donald Trump has not made a final decision but appears more […] END_OF_DOCUMENT_TOKEN_TO_BE_REPLACED

Conditions are horrific at Greece’s ‘island prisons’ for refugees. Is that the point?

Jan 16, 2018 Greece, Help Refugees, Human Rights Comments Off on Conditions are horrific at Greece’s ‘island prisons’ for refugees. Is that the point?

The first thing you notice is the smell: the stench from open-pit latrines mingling with the odor of thousands of unwashed bodies and the acrid tang of olive trees being burned for warmth. Then there are the sounds: Children hacking like old men. Angry shouts as people joust for food. And, finally, the sights: Thin, shivering […] END_OF_DOCUMENT_TOKEN_TO_BE_REPLACED

Up to 100 refugees feared drowned off Libyan coast

Between 90 and 100 refugees are feared to have drowned in the Mediterranean Sea after their rubber dinghy sank off the coast of Libya. The inflatable boat was carrying more than 100 people when it went down off the eastern city of Khoms on Tuesday, said Ayub Qasim, a spokesman for Libya’s coastguard. Rescuers found just 17 survivors […] END_OF_DOCUMENT_TOKEN_TO_BE_REPLACED

undocumented migrants and refugees were held in northwestern Edirne province on Dec. 30, state-run Anadolu Agency reported, citing a security official. The migrants and refugees were from Afghanistan, Pakistan, Syria, Morocco, India and Bangladesh, trying to cross into Europe illegally, the agency reported, citing the official who asked not to be named due to restrictions […] END_OF_DOCUMENT_TOKEN_TO_BE_REPLACED

Mediterranean migration crisis: Refugees face violence, vitriol and death at the new ‘back door to Europe’

Dec 31, 2017 Europe, Help Refugees Comments Off on Mediterranean migration crisis: Refugees face violence, vitriol and death at the new ‘back door to Europe’

At a small Senegalese restaurant hidden away in the depths of Tangier’s Old Town, a 28-year-old Sierra Leonean man with impeccable English tells The Independent about his “dream” of making the short sea crossing from Morocco to Spain. Suddenly, out of nowhere, a Moroccan man lurches into Amy’s Restaurant and lunges across the tables, swinging a firm […] END_OF_DOCUMENT_TOKEN_TO_BE_REPLACED

Pope Francis has defended refugees at his Christmas Eve mass, strongly urging the world not to ignore the plight of people who are “driven from their land” because of leaders willing to shed “innocent blood”. The leader of the world’s 1.2 billion Roman Catholics on Sunday led a solemn ceremony for about 10,000 people in St […] END_OF_DOCUMENT_TOKEN_TO_BE_REPLACED

WASHINGTON (Reuters) – In late October, President Donald Trump lifted a temporary ban on most refugee admissions, a move that should have cleared the way for more people fleeing persecution and violence to come to the United States. Instead, the number of refugees admitted to the country has plummeted. In the five weeks after the […] END_OF_DOCUMENT_TOKEN_TO_BE_REPLACED
123NEXTLAST

A group of Rohingya women and girls is expected to travel to Argentina within two months to testify against the Myanmar military in a genocide trial being heard by a court in Buenos Aires. The survivors have each given remote testimony of sexual assault to the court. The Argentine court has a history of taking […] END_OF_DOCUMENT_TOKEN_TO_BE_REPLACED