On 15 May 2020, the administration of the self-declared Turkish Republic of Northern Cyprus (TRNC) forcibly sent 100 Syrian refugees, including unaccompanied children, to Mersin, Turkey. They have been transferred to Kilis, near the Syrian border, where they are now. Most of the 100 Syrian refugees – 56 – are children and women and girls […] END_OF_DOCUMENT_TOKEN_TO_BE_REPLACED

Conditions are horrific at Greece’s ‘island prisons’ for refugees. Is that the point?

Jan 16, 2018 Greece, Help Refugees, Human Rights Comments Off on Conditions are horrific at Greece’s ‘island prisons’ for refugees. Is that the point?

The first thing you notice is the smell: the stench from open-pit latrines mingling with the odor of thousands of unwashed bodies and the acrid tang of olive trees being burned for warmth. Then there are the sounds: Children hacking like old men. Angry shouts as people joust for food. And, finally, the sights: Thin, shivering […] END_OF_DOCUMENT_TOKEN_TO_BE_REPLACED

Mytilene, Lesbos Island, Greece – When 17-year-old Karime Qias, an Afghan refugee, arrived in Greece‘s Moria refugee camp two months back, she felt as though she had arrived in prison. Along with her mother and seven siblings, she shared a flimsy tent with strangers. “The facilities were not hygienic, and the food was not edible,” she says, […] END_OF_DOCUMENT_TOKEN_TO_BE_REPLACED

As winter approaches, the Greek government is being urged to act to prevent the possible deaths of refugees trapped in squalid camps. A dozen human rights organisations, including Oxfam and Human Rights Watch (HRW), have united to highlight the issue, stressing Greece needs the support of EU leaders to end the policy of “containment”, which restricts asylum-seekers to the islands […] END_OF_DOCUMENT_TOKEN_TO_BE_REPLACED

More than a year after the UK government pledged to transfer hundreds of child refugees from Greece, the first unaccompanied minor from the country will arrive in London this week. However the 15-year-old Syrian is described by experts as profoundly traumatised because of the delay and has recently attempted to take his own life. Fourteen months […] END_OF_DOCUMENT_TOKEN_TO_BE_REPLACED 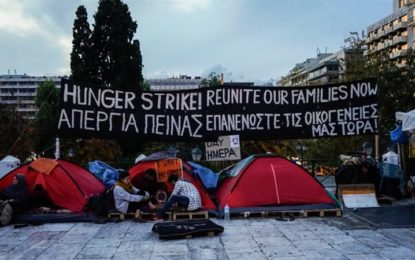 Athens, Greece – After fleeing war-ravaged Syria, waiting in Turkey, passing through a Greek island and traversing the mainland last year, Fahd al-Mekki and his family reached the Idomeneo, a crossing into Macedonia, only to be turned back. Macedonian border guards denied the family passage, telling the 53-year-old father that Jobar, his hometown near Damascus, was […] END_OF_DOCUMENT_TOKEN_TO_BE_REPLACED

A German newspaper has published the names of 33,293 refugees and migrants who died trying to reach Europe. Der Tagesspiegel listed victims' names, ages, and countries of origin, as well as causes and dates of death, over 46 pages. One entry is a 15-year-old boy who drowned on 15 November 2016 when a rubber dinghy he was on with 23 others sank while trying to […] END_OF_DOCUMENT_TOKEN_TO_BE_REPLACED

Sep 10, 2017 Countries, Europe, Greece Comments Off on Europe has failed to integrate its refugees – but one tiny Greek island succeeded

‘Sorry, please one cigarette, my friend.” The man is young: early 20s at the most, Syrian I think. He and many others from across the Middle East and Africa patrol Exarchia Square in central Athens. Bereft of work, they beg for change. Often they turn to selling pirated DVDs, tissues or, occasionally, drugs. The great migration […] END_OF_DOCUMENT_TOKEN_TO_BE_REPLACED

Aug 16, 2017 Countries, Europe, Greece, İraq, Turkey Comments Off on Why It’s Far Too Early to Talk of Return for Syrian Refugees

While several states might want a quick solution to the plight of Syrian refugees, returns are not a realistic option until the conflict comes to an end, writes Chatham House Associate Fellow Jeff Crisp. SINCE 2011, SOME 5 million Syrians have fled from the armed conflict in their homeland and sought refuge abroad, the largest numbers of […] END_OF_DOCUMENT_TOKEN_TO_BE_REPLACED

Jun 06, 2017 Central Europe, Countries, Europe, Greece, İraq, Reports, Turkey Comments Off on Watch The Movements Of Every Refugee On Earth Since The Year 2000

In 2016, more refugees arrived in Uganda–including nearly half a million people from South Sudan alone–than crossed the Mediterranean Sea to Europe. While the numbers in Africa are increasing, the situation isn’t new: As the world continues to focus on the European refugee crisis, an equally large crisis has been unfolding in Africa. Watch The […] END_OF_DOCUMENT_TOKEN_TO_BE_REPLACED
1234NEXT

A group of Rohingya women and girls is expected to travel to Argentina within two months to testify against the Myanmar military in a genocide trial being heard by a court in Buenos Aires. The survivors have each given remote testimony of sexual assault to the court. The Argentine court has a history of taking […] END_OF_DOCUMENT_TOKEN_TO_BE_REPLACED