Staff Correspondence A huge fire overnight swept through a crammed Rohingya camp in Cox’s Bazar destroying at least 500 ramshackle shelters leaving hundreds of people without homes, officials and aid workers said on Thursday. They said the fire erupted in predawn hours on the day at Rohingyas makeshift Nayapara camp but reported no casualty while […] END_OF_DOCUMENT_TOKEN_TO_BE_REPLACED

The Camp Clashes Raised the Question Whether Myanmar Govt. Plotted to Create Fight In Order to Declare the Rohingyas As ‘Terrorists’. Staff Reporter In this Corona situation, People are getting dissatisfied living in the camp because of the scarcity of proper food supply in time as the demand is ever-increasing since many thousands of small […] END_OF_DOCUMENT_TOKEN_TO_BE_REPLACED

Staff Reporter Abul kalam of Camp 16 told to our correspondence that Rohingya Community Members actually want to go back to Myanmar, not to a island which is in the middle of bay of Bengal. It is really very dangerous during monsoon season. Recently, some leaders from different camps went to see the location whether […] END_OF_DOCUMENT_TOKEN_TO_BE_REPLACED

Awarding-winning photographer Steven Laxton and New York City’s Lesbian, Gay, Bisexual & Transgender Community Center recently launched “Free to Be Me,” a photo and essay series featuring the stories of 20 LGBTQ refugees living in the Unites States. Those profiled in the series have fled their homes out of fear of being persecuted because of their sexual orientation or […] END_OF_DOCUMENT_TOKEN_TO_BE_REPLACED

Clients sit outside the Syrian refugees-owned restaurant ‘Mezze’ in Lisbon on September 19, 2017. Owned by Syrian refugees Fatima and her 2 daughters and son, the Mezze restaurant was immediately successful since its opening in Lisbon in September 2017, is a rare example of successful integration into a country with a very proactive hosting policy. […] END_OF_DOCUMENT_TOKEN_TO_BE_REPLACED 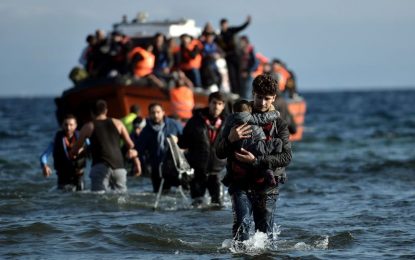 ‘I lost everything – then Britain gave me a life’: Refugees who risked it all to flee war-torn homelands tell their stories

Jul 13, 2017 Articles & Interviews, Help Refugees, İnterviews, Reports Comments Off on ‘I lost everything – then Britain gave me a life’: Refugees who risked it all to flee war-torn homelands tell their stories

They came across in packed boats, some were chased out of their homes by machine-gun-wielding men others and another sent here by his mom when he was just six. Now refugees have described escaping their war-torn countries to find safety and freedom on British soil. The British Red Cross traveled up and down the country during Refugee […] END_OF_DOCUMENT_TOKEN_TO_BE_REPLACED

Manus refugees not accepted by US to remain in PNG, Dutton says

Apr 12, 2017 Help Refugees, Human Rights, İnterviews Comments Off on Manus refugees not accepted by US to remain in PNG, Dutton says

Immigration Minister Peter Dutton says refugees on Manus Island who are not accepted by the United States will remain in Papua New Guinea. Australia has a deal with the US to take refugees from Australia's offshore facilities but there is no guarantee how many it will accept. Mr Dutton said the former Labor government struck […] END_OF_DOCUMENT_TOKEN_TO_BE_REPLACED

Lebanese Prime Minister Saad al-Hariri has warned that his country is close to "breaking point" due to strains of hosting more than one million Syrian refugees, fearing that unrest could escalate from tensions between refugees and local communities. Speaking to foreign media on Friday, Hariri said: "Today if you go around most of the host […] END_OF_DOCUMENT_TOKEN_TO_BE_REPLACED

‘We reached our limits’: Greece to stop taking back refugees – migration minister

Greece will cease taking back refugees under the controversial Dublin Regulation, as the country’s limited capacities to host people are already on the brink of collapse, the Greek migration minister announced in an interview. As the European Commission pressures Athens to re-implement the Dublin Regulation – stipulating that refugees can be returned to the first […] END_OF_DOCUMENT_TOKEN_TO_BE_REPLACED
12NEXT

A group of Rohingya women and girls is expected to travel to Argentina within two months to testify against the Myanmar military in a genocide trial being heard by a court in Buenos Aires. The survivors have each given remote testimony of sexual assault to the court. The Argentine court has a history of taking […] END_OF_DOCUMENT_TOKEN_TO_BE_REPLACED